As the ruling Peoples Democratic Party (PDP) and All Progressives Congress (APC), the two major parties in Ekiti State convulse spasmodically under internally-manufactured strains, a fresh face on the block is poised to take advantage and ride a storm of grassroots support into the state’s government house in Ado-Ekiti.

Mr Akinloye Oladele Aiyegbusi – AOA for short – is gunning to become the David who upends the Goliaths in the forthcoming elections. The former banker has signalled his intention to usher in a youth revolution by picking the SDP nomination form ahead of 2019.

Though yet to secure the party’s ticket, Aiyegbusi is already looking further afield. His campaign promise to build a strong economy anchored on sound educational policies is music to the ears of young and old alike in all the 16 local government areas. Already, many major players in the state, entranced by his uncommon blend of brio, charisma and youthful vigour, have abandoned their former loyalties and flocked to his side en masse.

With the state now a ruin of its former glories, Aiyegbusi represents the dawn of new hope for the beleaguered residents hence everyone is running to jump on his bandwagon. Omoluabi, as he is fondly addressed, is the toast of Ekiti youths who see him as one of their own.  In a landscape dominated by stale men peddling stale ideas, Aiyegbusi , the Usin-Ekiti born is a breath of fresh air. 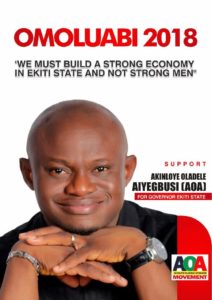 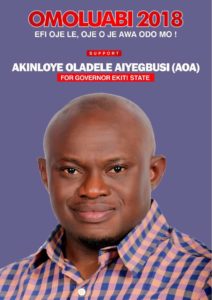