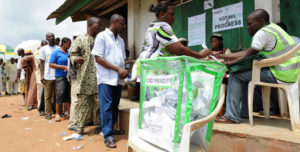 The United States has warned that the Boko Haram insurgent group is planning to carry out attacks during Nigeria’s forthcoming general elections.

A security alert was issued to this effect by the US embassy in Nigeria.

According to the alert posted on its website on Friday, the insurgent group plans to attack security and infrastructure, as well as markets, hotels, and malls.

“There is an increase in ISIS propaganda videos specifically directed to Nigeria and the ongoing civil unrest in Borno state and the Northeast,” the alert read.

“ISIS West Africa (ISWA) and Boko Haram have both stated they plan to disrupt the upcoming 2019 presidential elections by conducting attacks on Nigerian Security and infrastructure, as well as places of gathering such as markets, hotels, and malls.

“While we have no specific threat information to the U.S. Embassy or within Nigeria during the election season, U.S. citizens in Nigeria should remember to follow personal security precautions on a regular basis.”

The embassy urged its citizens to “carry proper identification, including a US passport with a current Nigerian visa, if needed” and to “exercise caution when walking or driving at night”.

It also advised US citizens avoid crowds and demonstrations, keep a low profile and to “stay alert in public places, including schools, hospitals, government facilities, places of worship, tourist locations, and transportation hubs.”

The presidential and national assembly elections will take place February 16 while the governorship and state assemblies polls will be held March 2.

0 0 0 0
Previous : So Sad! How Former LASAA Boss, Mako and Biola Alabi’s Ill-Fated Marriage Crashed
Next : “Buhari Doesn’t Have To Debate, His Achievements For 3.5 Years Will Talk” – APC