Many have been feared dead as a fuel tanker collided with a fully loaded commercial bus on Otedola Bridge, Lagos on Thursday. 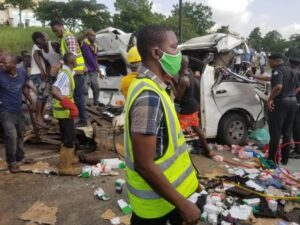 The accident which occurred at the lane inwards Berger, has reportedly caused heavy traffic.

Thelagostimes gathered that emergency workers are currently battling to save the situation in order to prevent a fire outbreak.