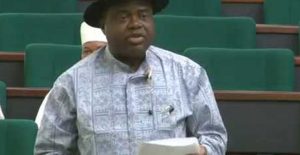 Candidate of the Peoples Democratic Party (PDP) in the November governorship election, Douye Diri, has been sworn in as the fifth civilian governor of Bayelsa state.

The inauguration took place at government house, Yenagoa, the state capital, on Friday.

In his inaugural speech, Diri implored the people of Bayelsa to embrace love and eschew hatred which he said could stampede the growth and development of the state.

David Lyon, Diri’s All Progressives Congress (APC) rival, was preparing for inauguration on Thursday when the supreme court sacked him on the grounds that Biobarakuma Degi-Eremieoyo, his running mate, presented forged certificates to INEC.

Following the ruling, INEC issued a certificate of return to Diri in Abuja, on Friday and he flew back to Yenagoa to take over from Seriake Dickson, the immediate past governor, whose tenure ended on Friday.

Dissatisfied protesters had stormed to the streets, especially in Yenagoa, to express grievances with the supreme court ruling.

They lit bonfires, blocked major roads and also invaded the residences of Dickson and the new governor, where they destroyed many vehicles.

Shortly after this, the police imposed a curfew in the state.