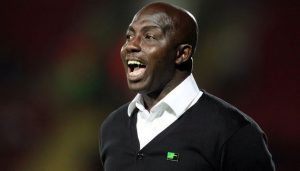 Siasia, who made this known In a telephone interview with TheCable from his home in Atlanta, Georgia, USA, said he needed more financial assistance than he was getting.

According to TheCable, For the former super eagle gaffer to stand a chance of having his ban overturned he needs N90 million (about $249,000) to finance his legal cost out of which he has raised a measly N269,000 from all sources.

Siasia was banned from footballing activities for life following a match-fixing investigation on August 16, 2019.

But the 52-year-old coach, who denied any wrongdoing as alleged by the FIFA Ethics committee decision, lodged an appeal to overturn the ban at the Court of Arbitration for Sport (CAS).

He opened a GoFundMe appeal account on January 2, which has only yielded only $275 from just three donors.

“I went to Quik Raise and everything you can ever imagine just to try and raise money to appeal the life ban FIFA placed on me in CAS,” Siasia told TheCable.

“What I have been able to raise so far through the GoMeFund is 275 dollars from almost a week ago.

“Through Brila FM, people have been donating. Some N1000 and even N500. Depending on what they want to give. It’s their widow’s mite.

“Only about 60 people donated and got about a hundred and sixty thousand or seventy thousand naira raised from that one.

“It is so so slow. Maybe Nigeria will wait till last minute to help.

“NFF will help if they want to help but they have enough problems of their own.

“I don’t know what to do again. I am appealing to people to please rise up and assist me to clear my name and get the ban lifted. So, that I can go back to what I know how to do best.”

Siasia featured for Nigeria 51 times and scored 13 goals in 11 years with the national team.

He coached Nigeria’s Super Eagles between 2010-2011 and returned for another spell in 2016 and also served as the gaffer of the country’s Under-20 and Under-23 sides at different times.

The CAS hearing for Samson Siasia’s life ban appeal is scheduled to hold on March 19, 2020 in Switzerland.

0 0 0 0
Previous : UN Says Only 3 Of Released Abductees Are Aid Workers
Next : Okorocha: I’m Not Scared Of Being Probed By Uzodinma