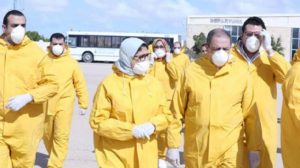 A foreigner that had been quarantined in Egypt on Friday tested positive to coronavirus, a statement from Egyptian health ministry has disclosed.

The case is the first to be recorded in African nearly two months after the epidemic broke out Chinese province of Wuhan.

The Egyptian health ministry said it had informed the World Health Organisation and had taken all necessary preventative measures.

The Egyptian authority refused to disclose the nationality of the affected person or any other details.

The death toll of the disease which broke out in Wuhan, capital of Hubei province in China, late last year, has exceeded 1,300. A total of 1,716 health workers are among the 60,000 persons infected with the virus.

Apart from Egypt, other countries where the virus has been confirmed are Singapore, UK, Malaysia, Taiwan, Spain, Vietnam, Germany, UAE, France and Japan.

Other countries where cases of the disease have been reported are Thailand, Canada, Australia, Italy, Russia, Sweden, Finland, Cambodia, and the United States.

WHO said it could take 18 months for the first vaccine for coronavirus to be ready.

0 0 0 0
Previous : Douye Diri Sworn In As Bayelsa Governor
Next : Breaking! So Sad… Wema Bank MD,Ademola Adebise,The Chairman Babatunde Kasali And Others In Trouble