The Federal University of Technology, Akure, has suspended some of its students who were involved in physically assaulting a female student.

In a statement signed by Adegbenro Adebanjo, Deputy Director, FUTA Corporate Communications, which was shared on its verified Facebook page, the university said that the incident happened in an off-campus hostel on Saturday.

According to the statement, the school held a disciplinary hearing this Sunday, November 17, and suspended the students after investigations were done.

Adebanjo said, “The Federal University of Technology Akure, has suspended the students involved in the bullying of a female student in one of the off-campus hostels on Saturday, November 16, 2019 indefinitely from all academic and related activities even as it continues with investigations into the circumstances that led to the odious and unfortunate act.

“In effect, the suspended students are not to be found anywhere in or near the Federal University of Technology Akure.

“The University deplores such behaviour and reiterates that all those found to be culpable will be visited with the full weight of the law under the extant rules and regulations governing students behaviour and conduct off and on the campus at the conclusion of investigation being carried out by the Students Affairs Division.” 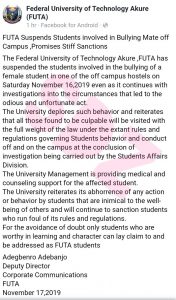 TheLagostimes gathered that a viral video was shared on Saturday. In the video sighted by Thelagostimes, a group led by a male and a female student were seen beating one 100 level female student identified simply as Bolu. The students were heard telling Bolu to kneel and when she refused they ganged up on her and started beating her.

This development has triggered a lot of reactions from Nigerians, with many calling for expulsion of the students.

– Here is more video of the boy and his school daughters seriously beating the female FUTA student over a misunderstanding .
pic.twitter.com/3wJBlOIvDH