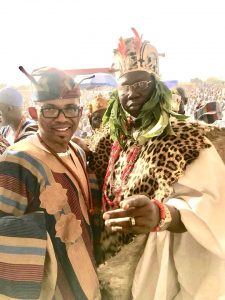 On Monday January 13, in a brightly lit hall choked with people and hands holding up cameras and phones above heads, Fuji Lord, Wasiu Ayinde, popularly known as K1 De Ultimate, was seated before the Alaafin of Oyo, Oba Lamidi Adeyemi, observing the rites following his installation as the Mayegun of Yoruba land, making him the first to hold this sacred title. The event was merry and graced by a lot of dignitaries but, in its wake, stirred a controversy and wagged tongues of people who were not comfortable with the installation.

The title bestowed on Wasiu Ayinde is similar to another Yoruba title the Aare Onakakanfo of Yoruba land, Oba Lamidi Adeyemi, conferred on popular human rights lawyer Mr. Kayode Ajulo. While some people cried against the Alaafin’s choice of action, some supported and even endorsed the Fuji Lord, saying he deserved the honour for how well he has uplifted the Yoruba culture through his music.

Mr. Kayode Ajulo, commenting on the controversy, said the installation of Ayinde as Mayegun of Yoruba land should not bring about any controversy because the two personalities, despite being different, have complementary roles to play in the development of the Yoruba nation.

Ajulo pointed out that as the Mayegun, he’s the conscience of the community, who is expected to constantly speak against the ills of the society. Consequently, the Mayegun himself has to be without blame. He said he never approached the Aare Onakakanfo to be given the title, but Aare, in his wisdom and based on his conviction of Ajulo’s commitment to the development of Yoruba race, willingly bestowed on Ajulo the title of Mayegun Aare Onakakanfo of Yorubaland. So if the Alaafin of Oyo, also a man of wisdom, decided to bestow this sacred title on Ayinde, he must have had a good reason.

0 0 0 0
Previous : Okorocha: I’m Not Scared Of Being Probed By Uzodinma
Next : Buhari Nominates IMF Executive Director As CBN Deputy Governor