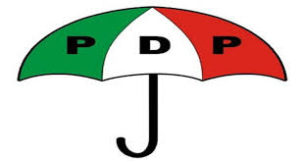 Uche Secondus, national chairman of the Peoples Democratic Party (PDP), other bigwigs and stalwart of the party have staged a protest in Abuja to express their dissatisfaction with judgement of the supreme court on the Imo governorship election.

Secondus, on Friday, during the party’s emergency National Executive Committee (NEC) meeting had said that the aim of the protest was to let Nigerians know that injustice has been done to the party.

The march took off from the PDP’s Legacy House in Maitama, Abuja amid tight security.

The protesters, who are in hundreds, held placards which read: “Save Judiciary”, “Presidency and Judiciary Murder Democracy” and “We say no to Supreme Court judgement in Imo” among others.

Security agents had barricaded the road leading to the supreme court.

In March 2019, the Independent National Electoral Commission (INEC) declared Ihedioha as the winner of the election, but Uzodinma challenged the decision up to the supreme court