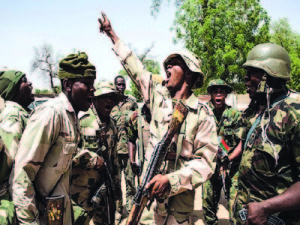 Ndume disclosed thisIn an interview with PUNCH Newspaper on Saturday.

He said victims of insurgency prefer soldiers to mediate in plethora of civil and administrative issues such as marital status among others.

Ndume added that the victims repose so much trust in the soldiers that they would rather them be in charge of their humanitarian needs and relief materials than civilians.

“What I discovered now is that the victims prefer military authorities to handle disbursement of relief materials and money because they trust the soldiers that they would do justice to the donations,” the lawmaker said.

“In my local government area, military officers go out of their way, outside their duties, to gather children, teach them, and provide free writing materials and books for them.

“In fact, soldiers have now taken up the responsibilities of magistrates because couples now take issues bordering on their domestic affairs to soldiers for peacemaking.

“Wives usually report their husbands to the soldiers so as to help them settle their private affairs. This is because in my area, for instance, we no longer have judges, teachers, health workers and even the local government administrators because they are no longer there.”

When asked if the current service chiefs should be sacked over their alleged failure to tackle the insurgency, Ndume said President Muhammadu Buhari knows why he is still keeping them.

“Honestly, my own take on it is that the President knows better. Assuming that people are saying that a set of army personnel that have been fighting insurgency in the north-east should be changed so that new tactics could be experimented, it would have been a different thing but when they are saying that the heads of the military arms should be removed, it will still be the same hierarchy because those who would replace them are still within the system, and not from outside,” he said.

“The president, who appointed the current service chiefs, knows why he is still keeping them. He actually knows better.”