Nigerian entertainer Burna Boy and his father have been reportedly arrested by the Nigerian police. 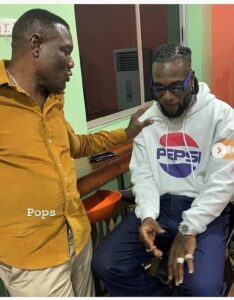 According to reports, residents living in the same area with Nigerian entertainer Burna Boy are outraged by the incessant noise-making in the area by the singer and his father.

The neighbors could not hold their cool and came out to march to the singer’s residence after they reportedly called law enforcement officers to come and arrest the Grammy nominee and his father.

According to a video sighted by thelagostimes, some of the residents in the area claimed Super Eagles striker and Manchester United forward, Odion Ighalo also lives in the area but unlike Burna Boy, does not make noise.