The gubernatorial candidate of the All Progressives Congress in Lagos State, Mr. Babajide Olusola Sanwo-Olu has reiterated his resolve to give room for private sector participation in the provision of infrastructure and other programmes that will make life better for Lagosians when he wins the coming governorship election in March. 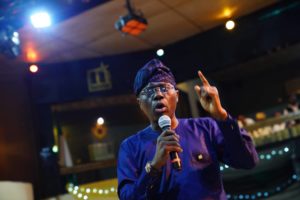 Sanwo-Olu made this known during the interactive session of the Grand House Reception, GHR, held in his honour at the upscale Niteshift Coliseum in Lagos.

Addressing the distinguished audience comprised captains of industry, policy makers, key entertainment stakeholders and Lagosians from all walks of life, the Lagos APC standard bearer said his administration will involve more of the private sector in achieving their vision of taking Lagos to a greater height. 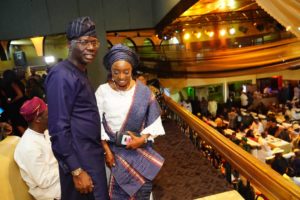 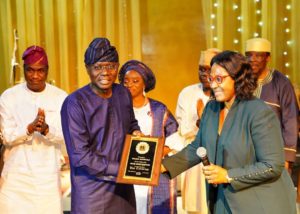 Sanwo-Olu, who highlighted his significant exposure to diverse assignments and responsibilities in the governance process, leading to his various appointments as three-time commissioner and immediate managing director of LSPDC among others, gave insight into his planned articulated solutions to traffic gridlocks around Lagos, and on housing, tourism, health and infrastructure.

He explained how his T.H.E.M.E Agenda will bring new jobs and wealth creation opportunities that would benefit all Lagosians with no one left behind.

According to the three time commissioner in Lagos State, the T.H.E.ME. agenda stands for Traffic management and Transportation, Health and Environment, Education and technology, Making Lagos a 21st century economy as well as Entertainment and tourism.

Speaking earlier, the Chief host and Guv’nor of Niteshift Coliseum, Mr. Ken Calebs-Olumese appreciated the APC candidate and his running mate, Dr. Obafemi Hamsat for their sincere desire to serve the people of Lagos.

He wished them all the very best in the forthcoming election, while hoping to host him again as an elected Governor of Lagos State.

At the well attended event, Mr Sanwo-Olu was treated to the Niteshift Coliseum renowned hospitality which started with a one-hour lavish reception on an almost 500-square meter red carpet spreading around the courtyard of the event venue, while the Lagos APC candidate mingled with high profile guests present.

In a message after the event, elated Sanwo-Olu tweeted: “Tonight,@drobafemihamzat & I were honoured by Mr. Ken Calebs-Olumese & The Niteshift Coliseum team at a Grand House Reception. The event was a good opportunity to share my experience & plans #ForAGreaterLagos with distinguished patrons and invited guests.”