Officials of the National Agency for Food and Drug Administration and Control (NAFDAC), on Wednesday, raided the office of a lady who went viral after a video her bleaching a client’s skin surfaced on the internet. 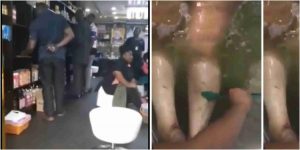 Thelagostimes gathered that in the video which had earlier appeared on the internet about a week ago, a lady was seen ‘treated’ with a certain chemical solvent which instantly bleached her skin and made them pale, while the beautician was scraping the skin with an object.

This video however generated a lot of negative reactions on social media, with many people wondering the length some ladies now go to have a fairer skin.

In a new video sighted by Thelagostimes today, officials of the food and drug regulation agency were seen at the facility inspecting the chemicals and products they use on their clients.