Following the decision of the Nigerian government to promote the patronage of local products by closing the borders, traders have continued to lament over low patronage of their goods.

Among other goods and products banned from coming into the country through the borders, rice seems to be the food product that has affected a lot of Nigerians.

Rice is unarguably the most common food eaten in Nigeria. In those days, rice is a meal eaten during special occasions alone. However, in this present age, hardly will you find an individual who would not eat rice in two days. Restaurants and food vendors place high priority on rice because that is what most of their customers request for. 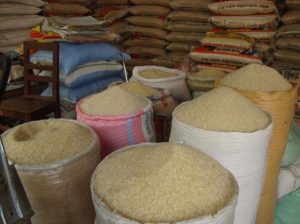 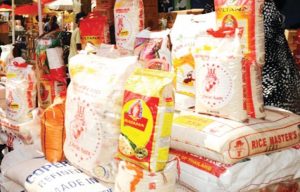 Interestingly, rice is not restricted to a particular tribe or ethnic group. It is one of the meals that unite us as Nigerians.

Thelagostimes recalls that Nigeria’s president Mohammadu Buhari had on August 20, 2019 announced the partial closure of Nigeria’s borders. However, less than two months after, the government announced a total closure, banning all importation of goods through any of its land borders.

When Thelagosimes visited Ogba market in Ogba, Lagos state and went round the shops to find out the reaction of traders towards the border closure, especially the ban on rice importation, a lot of traders and retailers complained of low patronage and difficulty in accessing the local rice.

Blessing who sells frozen chicken lamented that sales have dropped drastically and people have now resorted to buying meat.

“It has not been funny. Everything is on the high rate because of the border closure. Over there, the goods might be cheap. But bringing it here is very difficult. Like we going to the market now to get goods, we have to take huge amount of money. And getting to the market you won’t be able to get a large quantity of the things you want. So that will make the business to drop. 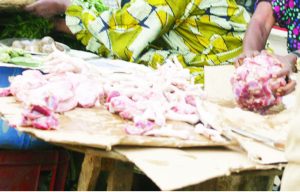 “Moreover, those that are even buying, when you tell them the price, they will make another option like getting meat or any other thing. So, the sales have dropped and we don’t have much goods again. When you go to the market with 500,000 nowadays, you won’t be able to get enough because what you will be able to get in large quantity for 100,000, you might get half of it for 200,000.

“When the border was still open, a carton of orobo chicken was 8,000 or 8,500 but now, a carton is 15,500. You can see the difference. So those that are doing party now prefer going for meat. Before, we stock our freezer. This is the season. By this time, we should have stocked the freezer.

“Even kings oil is now expensive. Before, we sell 25 litres for 11,000 but now, we ourselves buy for 14,000. So everything is on the high rate. Before we sell spaghetti for 200 naira but now it’s 250. Everybody is complaining. The government said they want us to patronize local made products. Then, when the border was open, Nigerian chicken was 8,000 and when we request for it, the supply comes very fast. But now, it’s more expensive because that is the only option. When we tell customers a kilo of Nigerian chicken is 1,300, they won’t want to buy.

“You want us to buy Nigerian products but they are on a high rate. Not only that, it s no longer enough. When we request for supply of Nigerian chicken, it will take them like a week to bring it to us. And when they bring it to us, we cannot get the quantity we demanded for. They have to share it. And that won’t be enough”, Blessing lamented.

Similarly, Christianah who also sells frozen chicken and oil said: “ A carton of chicken before closure of border was 8,000 but now, its 15,000. Nobody wants to buy that because there’s no money. People now resort to buying fish. We want the government to open the border. If you want to close the border, you should look for a better alternative, not just closing the border like that. They should make provision for a better and quality product before closing the border. A lot of people have stopped selling chicken and have now started selling fish. When you tell customers a new price, they will run”.

In the same vein, Godwin who trades in rice disclosed that he doesn’t have rice to sell as a result of the border closure. He lamented that the local rice is dirty and filled with stones.

“Customers complain a lot about the Nigerian rice. It is always dirty and filled with stones. Personally, instead of eating that, I’ll just eat spaghetti”, he stated.

On his own part, Ogochukwu disclosed: “I still get foreign rice from people who cut corners to get it. Foreign rice was 12,000 before but its almost 25,000 now. I wasn’t selling local rice before the border closure. Whatever the government wants to do, let them do”.

According to Uche, the Nigerian rice is in grades. He disclosed that some traders mix the fake ones with the original ones in order to deceive unsuspecting customers.

“They said we should start eating Nigerian rice. Nigerian rice is in grades. There’s one that has various colours, that’s the cheaper one. It’s about 18,000. Some people even mix the bad with the good. Before they closed the border, we sold foreign rice for about 14,000. Now, it’s 25,000.

“I got this foreign rice from people who are popular. They hustle for the rice and bring for us. I’m not happy with the border closure because it does not favour me. Some people don’t like the local rice and they also complain about the price. Let the government open the border, people are suffering”.

Meanwhile, theLagostimes spoke with a customer who came to inquire if Uche had foreign rice. The customer who pleaded anonymity disclosed that he prefers the foreign rice to the Nigerian rice.

“The local rice doesn’t last. When you parboil, it doesn’t taste well and it decays. It is also filled with stones and when you eat, you have to be very careful”, he said.

0 0 0 0
Previous : JUST IN: Police Discover Another Torture Centre In Ibadan, Rescue 400 Captives
Next : JUST IN: Sowore, Co-defendants Have Met Bail Conditions, Will Be Freed Today – Falana