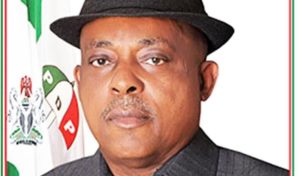 National chairman of the Peoples Democratic Party (PDP), Uche Secondus, has called on judges of the Supreme to avoid a repetition of the type of judgement it delivered In Imo where the apex court sacked the opposition party’s candidate, Emeka Ihedioha and declared candidate of the All Progressives Congress (APC), Hope Uzodinma, who came a distant fourth winner of the election.

The Secondus made the called at the party’s 87th national executive council meeting (NEC) in Abuja.

Secondus also alleged that the presidency was mounting pressure on the supreme court to rule in favour of the All Progressives Congress (APC) in its appeals challenging Sokoto, Bauchi, Adamawa and Benue governorship elections.

All four states were won by the opposition party in the March 9 gubernatorial election.

The apex court has fixed Monday, January 20, to deliver judgment on APC’s appeals challenging PDP’s victories in the states.

Secondus described the ruling as electoral fraud, asking judges on the panel not to preside over any other case involving PDP.

“The ruling APC and the Federal Government, combining effectively with the Independent National Electoral Commission and some security agencies including military, took the electoral manipulation to the next level,” Secondus said.

“The National Working Committee has credible intelligence that the Presidency and the APC leadership are still arm-twisting the judiciary to ensure that they deliver to them Sokoto, Benue, Bauchi and Adamawa while keeping Kano, which we clearly won.

“We have demanded the seven justices that participated in the Imo judicial fraud recuse themselves from the remaining cases involving the PDP.”

Secondus accused the presidency of abandoning its duties to “take up issues” with the PDP.

“We know that the APC and President Buhari have taken our civility for weakness and inability to act,” he said.

“The Presidency has even abandoned governance amidst the myriads of challenges facing the land and prefers to take issue with us as main opposition party, a deliberate policy to divert attention from their inept leadership.”