Peace is overrated. Ask Governor Ibikunle Amosun. The seeds of peace and slumberous calm wilted in his yard immediately after the Ogun State primaries. 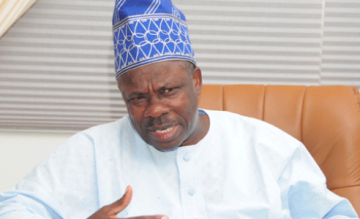 However, our attention has been drawn to the latest political antics borne out of Governor Ibikunle Amosun’s relentless desperate move to upturn the overriding wish of all Ogun APC party members, who unanimously voted for Prince Dapo Abiodun as their gubernatorial candidate.
Governor Amosun has concluded plans to commission two highly revered Paramount Rulers from Ogun State to go and plead with President Buhari not to accept the candidature of Prince Dapo Abiodun, who is the validly elected candidate of the party.

Information has it that the Alake of Egbaland, HRM Oba M. A. Gbadebo and Olu of Ilaro, HRM Oba Kehinde Gbadewole Adeboye Olugbenle may have been successfully hoodwinked and placed on standby for this task. We have been reliably informed that the traditional Rulers who are presently in Lagos, in preparatory to leave for Abuja any moment from now, have been fed with all manners of unsubstantiated lies and falsehood by the governor.

Having failed with so many attempts geared towards legalizing illegality, including a botched attempt to get an ex parte order at the Federal High Court Abeokuta on Friday 19th October ,it is quite unfortunate that Governor Amosun is using his position of authority to unduly influence and mobilize respected traditional leaders for such hatched job. This act is capable of desecrating the symbol of peace and unity which our traditional leaders stands for and must be widely condemned by concerned citizens of Ogun State at home and abroad.

Our traditional leaders should not be dragged into this kind of murky politics which is heavily laden with ulterior and selfish motive being singlehandedly pursued by Governor Amosun, who’s frantically and desperately looking for every means to upturn the final decision of party members.

We all know that our dear president is a peace loving man whose integrity cannot be compromised. He will not upturn the mandate that had been freely given to Prince Dapo Abiodun by all members of Ogun APC, in a bid to satisfy the personal interest of Governor Amosun.

The general public is hereby put on notice. Concerned citizens of Ogun State should kindly find out the real reason behind Mr Governor’s desperate moves to install Hon Akinlade at all cost.

It appears there is more to this than meet the eyes.