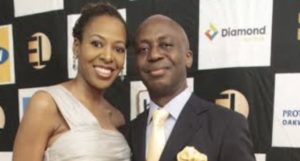 The marriage between former Managing Director of Lagos State Signage and Advertisement Agency (LASAA), Makanjuola Alabi and his beautiful wife, Biola, has reportedly crashed after over a decade.

The marriage, which many believed was made in heaven and consecrated on earth, has left many dumbfounded, as they couldn’t comprehend what happened between Biola and the man she once described as her biggest supporter.

As things stand, reports have it that the once loving couple do not talk again, as bliss had deserted their marriage in unexpected hours, like a crushed knight fleeing the gates of a fallen fortress.

To Mako, as popularly called, the love that warmed the inner cockles of his heart soon became the thorn that pierced his lungs while he inhaled the fragrance of passion, hence his marriage to Biola, who was a former Managing Director of MNET, crashed irredeemably, while they were busy doing other things.

However, contrary to belief that the marriage recently hit an iceberg, the couple allegedly separated from each other a long while ago but they succeeded in keeping it under wraps to avoid the noise and scandal that could result from undue media exposure.

While no one is sure if they would ever reconcile and remarry, it is an open secret that the couple are happy without each other.

Mako, for instance, is reported to be having the ‘time of his life’, as he allegedly drinks more and hangs out more now, according to The Capital findings.

More so, sources around the estranged family are blaming Mako’s dwindling finances for the crash of the marriage and the fact that he is allowing the consequent frustration and depression get to him.

There was a bit of slow down n his finances but soon bounced back with VIMedia, a provider of premier, high-impact outdoor and indoor advertising solution in Nigeria.

But business has not been as good as before and this, among other things, made sources insisted that it may have affected the marriage.

Biola did not help matters either.

After quitting her high-profile job as managing director, MNET Africa, she floated Biola Alabi Media, a content creation and consulting company working across the world in broadcast, telecommunications and digital industries.

She also ventured into movie productions and is the brain behind box office hits like Banana Island Ghost and Lara and the Beat.