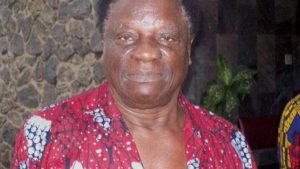 A veteran Nigerian highlife musician, Victor Olaiya, has passed on at the age of 89.

Bimbo Esho, the managing director of Evergreen Music Company, disclosed this in a statement on Wednesday — hours after the iconoclast passed on.

In the statement, the veteran singer was said to have have died while on admission at the Lagos University Teaching Hospital (LUTH).

“The entire music world wish to announce the death of a Legend of Highlife music one of the last man standing, the last of the original Dr. Victor Abimbola Olaiya OON,” Esho said.

“We pray that the Doyen of highlife music finds repose with the creator while wishing the family and entire music community the fortitude to bear this irreplaceable loss.”

The statement, however, did not disclose the cause of his death.

Born in December 1930 to Alfred Olaiya and Bathsheba Olaiya, the late musician had come through as the 20th child of a family of 24.

Olaiya had become extremely famous in Nigeria during the 1950s and early 1960s, although he had received little recognition outside his native country.

He had learned to play Bombardon and the French Horn at an early age and was later accepted by Howard University in the United States to study civil engineering in 1951 after passing his exams.

However, driven by his passion for music-making, Olaiye pursued a music career instead to the disapproval of his parents — playing with the Sammy Akpabot Band.

Having doubled as the leader and trumpeter for the Old Lagos City Orchestra, Olaiya would later join the Bobby Benson Jam Session Orchestra.

He then formed his own band in 1954 and was eventually chosen to play at the state ball when Queen Elizabeth II of the United Kingdom visited Nigeria in 1956.

During the Nigerian Civil War, Olaiya had been given the rank of a lieutenant colonel (honorary) in the Nigerian army and his band played for the troops at various locations.