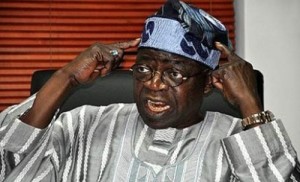 Ahead of the 2023 general elections, the South-West chapter of the ruling All Progressives Congress (APC) is currently polarised over the rumoured presidential ambition of Asiwaju Bola Tinubu, national leader of the party, and Governor Kayode Fayemi of Ekiti State, who is the chairman of the Nigerian Governors’ Forum (NGF).

Credible sources in the party said the ambition of the two men is what is responsible for the uproar in the zone over the nomination of former governor of Oyo State, Abiola Ajimobi, as the party’s deputy national chairman (South West).

It was also gathered that given the influence of the deputy national chairman, both Tinubu and Fayemi are “eager to nominate a candidate who will be their ears and eyes when critical decisions are taken, especially as regards the 2023 presidential election.”

According to Daily Independent, while Tinubu is backing Ajimobi, one of his trusted associates for the position which became vacant following the appointment of Otunba Niyi Adebayo as Minister of Trade, Industry, and Investment last year, Fayemi is rooting for the emergence of Senator Gbenga Aluko, a former Senate Deputy Chief Whip, for the position.

However, Daily Independent learned that the body language of the national leadership of the APC led by Comrade Adams Oshiomhole is tilting towards Ajimobi, a situation that has not gone down well with Fayemi and other critical stakeholders in the party.

The thorny issue has sharply caused a division in the South West chapter of the party as critical stakeholders have failed to reach a unanimous decision on presenting a sole candidate for the position.

Already, the Ekiti State chapter of the APC has already nominated Aluko, who represented Ekiti South in the Senate between June 1999 and June 2003, for the prime position, saying the state should nominate a replacement as Adebayo, the previous occupant, hails from the state.

They have argued that when Alhaji Lai Mohammed, the Minister of Information and Culture, who hails from Kwara State, was appointed by President Buhari in 2015, while he was serving as APC’s national publicity secretary, the party replaced him with Bolaji Abdulahi, who is also from Kwara State, and that when Abdulahi left, his successor and current spokesman of the party, Lanre Issa-Onilu, also came from the same state.

According to our source, “There is a sharp division in the South-West caucus of the APC and the main issue is the rumoured presidential ambition of Governor Fayemi and Asiwaju Bola Tinubu. Both men are currently testing their powers with the vacant position of deputy national chairman of the party.

“While Tinubu and some party elders are backing Ajimobi, Fayemi and some few ones are rooting for Gbenga Aluko.

“The issue now is who emerges triumphant among the two? While Fayemi has a good case that the position be retained by Ekiti State as the former occupant is also from the state, Tinubu and others are claiming that the position should go to Oyo because it is the only state in the South West that currently has no APC governor.

Speaking on the issue, Ade Ajayi, spokesman of the APC in Ekiti State, insisted that the position of the deputy national chairman belongs to Ekiti State as the former occupant is from the state.

He said: “When we learned that some leaders of the APC wanted to move the slot to Oyo, we set up a five-man committee headed by the deputy governor, Bisi Egbeyemi, to go and interface with the party’s leaders that are meeting in Osun on the need to retain the position in Ekiti according to the zoning reached at the last national convention.

“We articulated our position in a letter but, unfortunately, some of our female members, who were aware of our going to Osun and the purpose, decided on their own to follow and make peaceful protest on the need for the party hierarchy in the South West to respect the decision of the national convention.”

Speaking further, he said even if the post of the national deputy chairman (South-West) would be taken to another state, “it must be at the next national convention; but for now, it is our slot and we must produce Adebayo’s successor – that is what the constitution of the party says and it must be strictly adhered to”.

In a related development, the Lagos State chapter of the APC said it was not going back on its quest to support Tinubu’s presidential ambition in 2023.

The party also said it didn’t believe that Fayemi’s position as the Governors’ Forum chairman will affect Tinubu’s chances. Speaking with Daily Independent, Seye Oladejo, the party’s Publicity Secretary, said: “The political story of Governor Kayode Fayemi will not be complete without acknowledging the role of Asiwaju Bola Tinubu.

“So, if some people now think he has political clout because of his position as the chairman of the Nigerian Governors’ Forum, then let us wait until the fullness of time.

“I think it is still a bit hasty but now that they are bringing the issue of 2023 to the front burner, as far as we are concerned, Asiwaju Bola Ahmed Tinubu has paid his dues and he has the requisite experience and passion to move this nation forward.

The Lagos State APC is not backing down on that position,” he said.