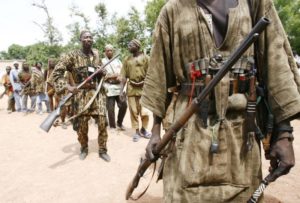 No fewer than Six police officers were killed on Wednesday when gunmen suspected to be the dreadful Boko Haram insurgents invaded Dapchi, a village in Yobe State.

The Executive Secretary of Yobe State Emergency Management Agency (SEMA), Mohammed Goje, who confirmed the incident while addressing journalists on Thursday in Damaturu, Yobe capital, said six of the bodies recovered after the onslaught were police while the identities of the other two can’t be ascertained.

Goje said he and his team were in Dapchi to evacuate the corpses of those killed in the attack.

LagosTimes gathered that houses and properties were razed during the attack.

Mr Goje said he travelled in a small convoy and the team was accompanied by Goni Bukar, the commissioner for sports and youth development, who hails from Dapchi.

“We have just returned from Dapchi as you can see,” he told journalists.

“We have evacuated eight dead bodies. Six of them could be easily identified as police personnel because they are wearing police uniform. Most of them are MOPOL. The other two bodies I can’t say their identity because either, the soldiers nor vigilante or police could identify them as their members.”

Mr Goje said he had given instructed the those at the mortuary to take proper care of the bodies in order to aid to smooth and proper identification from their families so they could be given a befitting burial.

“We have to evaucate the bodies from the scene because we cannot allow the dead bodies to rot away because these people that are killed have families,” he said.

“We have therefore given instruction at the mortuary that their corpse should be properly taken care of for identification. They deserve befitting burials from their families.”

The Yobe SEMA boss said the insurgents burnt down the military base and a section of the police station in the village. A military vehicle was also torched.

The insurgents made away with one military vehicle, according to reports, and burnt one of the cars belonging to Mr Bukar

The District Head of Dapchi, Yuroma Kamba, who was distraught from the attack called on the government to mobilise massive prayers against the insurgents.

“Prayers should be intensified by all and sundry with government taking the driver’s seat,” he said.

A resident of Dapchi, who fled to Damaturu, said the mobile police officers displayed uncommon bravery and gallantry and paid the supreme price as they waited behind to fight the insurgents as both soldiers and vigilantes cower and ran away when they got wind of the imminent attack.

“I want to tell you that those mopol that died refused to run away,” he said.

“They stood their ground to fight. All the soldiers in the town left including vigilantes when the news of the attack filtered the town. But those mopol did not run. They engaged Boko Haram and fought to die. May their souls have rest.”

The Boko Haram fighter launched an attack on Dapchi Wednesday night on the security agencies in the village with residents running to the bush for safety.

Dapchi is a town in Yobe State where schoolgirls were in February 2018 abducted from their dormitory by the Boko Haram. The girls were later released in a deal with the government; but one of the girls, Leah Sharibu, was held back because she reportedly refused to denounce her Christian faith.

0 0 0 0
Previous : JUST IN: Oshiomhole Reveals Those Trying To Oust Him As APC Chairman
Next : Lassa Fever: 11 More Killed As Death Toll Reaches 132