Bowen University, Iwo, Osun State, has sacked about 10 per cent its workforce. 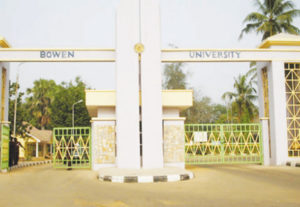 Thelagostimes gathered that the affected staff were said to have received mail intimating them of the termination of their appointment on Tuesday after their salaries for the month of June were paid.

One of the affected staff members said 127 workers across all departments and sections of the institution were affected.

The Head of Media and Public Relations Unit of the university, Toba Adaramola, confirmed the sacking on Wednesday.

Adaramola said, “When the present management of the institution came on board in 2018, it was discovered that the school was at the point of inflexion.

“When the management studied the situation, it was discovered that we must change our culture of doing things, or change product.

“To sustain the university, some people have to go. So the excess workers in all departments and sections were told to go. It cuts across both the academic and non-academic.

“Eight to 10 per cent of the workforce was affected. June salary was paid yesterday (Tuesday) and after the payment, the affected workers were intimated of the disengagement through mail.”