The All Progressive Congress (APC) screening committee has disqualified the governor of Edo State, Godwin Obaseki, and two others from participating in the Edo Governorship election. 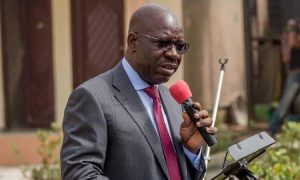 Obaseki was disqualified on Friday during a press conference organised by the screening committee.

According to the committee chairman, Prof. Jonathan Ayuba, Obaseki was unfit to qualify on the grounds that his HSC and NYSC certificates are defective.

He also stated that the committee could not ascertain the authenticity of his National Youth Service Corps (NYSC) certificate.

Thelagostimes recalls that two days ago, the University of Ibadan (UI) management confirmed that Obaseki graduated from the institution.

The school registrar, Olubunmi Faluyi, revealed in a statement on Wednesday that the governor attended and graduated from the university.