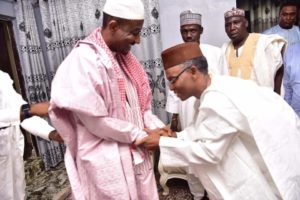 The destination of the ex-monarch is said to Abuja as he was seen riding in the same vehicle as Nasir el-Rufai, governor of Kaduna state.

The seasoned economist, in what appears to be his first public outing since his relocation to Awe, also led Jumaat prayer in the first

Sanusi, a former CBN governor regained his freedom after a federal high court in Abuja ordered his immediate release by security agencies.

LagosTimes had reported earlier in the day the visit of el-Rufai to the dethroned Sanusi.

El-Rufai visit is coming hours after a federal high court in Abuja ordered the immediate release of the ex-monarch following hearing of the ex parte application filed by his lawyers.

LagosTimes understands that the governor came into the town on lowkey without the customary razzmatazz of executive that top Nigerian politicians are known with. The governor arrived at about 12:47pm on Friday in a seven-car motorcade without the thrills of indiscriminate blaring of siren and hoking of horn.