One of the best kept secrets of the Asiwaju Bola Tinubu dynasty is about to be exposed like a looted cupboard following shocking revelations that there is more than meets the eye when it comes to the identity of Seyi Tinubu, the debonair second child of the self-proclaimed Lion of Bourdillon. 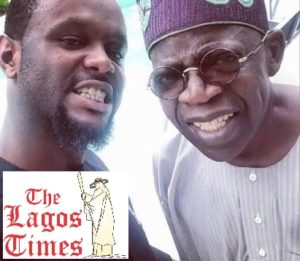 LagosTimes can exclusively and spectacularly reveal that contrary to popular belief which held Tinubu’s wife and senator representing Lagos Central at the national assembly, Oluremi as the mother of his three surviving children, Seyi is actually her stepson and not her biological son.

Even as eyes are popping out of sockets at this extraordinary development which suddenly dropped in the public domain like an hydrogen bomb, details have emerged about how Seyi is the love child of Tinubu and Bunmi Oshonike.

No doubt, her name hardly rings a bell nowadays, but in the days when money was worth its value, Bunmi was one of the richest ladies in town. She rubbed shoulders with the high and mighty like an equal and was an epitome of well connectedness, an A-list air hostess who served the Who’s Who on international flights.

It was on one of those flights from America to Nigeria that Bunmi crossed paths with the APC leader and kindled a sizzling romance which was the talk of the town at that point. One thing led to another and she suddenly found her stomach protruding with Tinubu’s child.

With the help of some marvellous sleight of hand worthy of an A-list movie, the child she had for Tinubu was somehow passed off as Oluremi’s without any noise or uproar by the actual mother. Perhaps she felt like motherhood was a burden too onerous for her to bear or that the child would grow up better at his father’s side. Whichever the case, the deal was sealed with a kiss and Bunmi rode off into the sunset never to be heard of again for a long time.

Until news recently surfaced that she had cast off the glittering dresses of glamour and donned the cloak of piousness along the way. According to those with a pulse on the matter, Bunmi had her own Road to Damascus moment and has become a dedicated servant in God’s Vineyard.

The mother of Seyi has become a renowned Prophetess and the main attraction at the Calvary Parish of the Celestial Church of Christ, Ogba ,Lagos, one of the popular white garment churches around. She is said to be very energetic, prayerful, and a force to be reckoned with in spiritual matters.

Meanwhile, Seyi has long been made aware of who his real mother is. In fact, he was one of the popular kids who played around at Calvary Parish in Ogba. However, out of respect for his father’s status in the society and the sacrifices of Senator Oluremi in bringing him up, he has been unable to acknowledge his real mother in public.

Even when he tied the knot at a destination wedding to Lebanese-Nigerian beauty Layal, his actual mother Bunmi Oshonike was allegedly nowhere to be seen either on the Lagos or Italian leg of the grand wedding. Some however claim she was there but on an extremely low key level so as not to draw attention to herself.