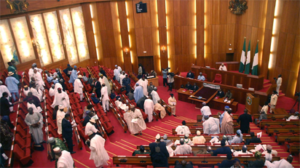 The senate, Nigeria’s upper legislative chamber, has given President Muhammadu Buhari the nod to borrow $22.7 billion.

The legislative body approved the request on Thursday amid vehement disapproval from some senators.

While the matter was being debated, Enyinnaya Abaribe, minority leader and Abdulahi Yahaya, majority leader implored the senate to consider the recommendations on the loan bit by bit instead of doing it once, saying that this will acquaint the lawmakers with the niceties and details of the report.

He suggested that it should be done “item by item”, but Senate President Ahmad Lawan disagreed saying it will be done at once and as a whole.

Subsequent debate on the matter forced the senate into an executive session during which it agreed to approve the request.

Nigerians have expressed their dissatisfaction with the loan request saying such request, if granted, will further plunge the country into the abyss of debt as the country is currently grappling with the detrimental effects of servicing both internal and external debt.

It would be recalled that Buhari sent the loan request to the senate in 2019 though it was rejected by the previous senate under Bukola Saraki.