With a proposed fiscal plan of N115 billion for public infrastructure, Lagos State, next year, will be a massive construction site.

The state governor Babajide Sanwo-Olu, on Friday, presented the Year 2020 Budget proposal to the House of Assembly, unveiling his administration’s plan to accelerate the growth of State’s economy by proposing aggressive investments in critical areas of priorities – physical infrastructure, environment, human capital and security.

Sanwo-Olu announced that the State would be spending N1.168 trillion, which will be funded from a projected Internally Generated Revenue (IGR) of N1.071 trillion. The budget deficit, put at N97.53billion, will be financed through internal and external loans, the Governor said.

According to him, the fiscal proposal also included a provision for the new minimum wage.

Giving a breakdown of the budget tagged “Awakening to a Greater Lagos”, Sanwo-Olu earmarked 62 per cent, representing N723.75 billion of total spending, for capital expenditure. He said recurrent expenditure, put at 38 per cent, will take N444.81 billion.

About N167.81 billion of the recurrent expenditure will go for personnel costs and other staff-related expenses, representing 22.02 per cent of the total revenue. This, the Governor noted, is within the acceptable wage policy, which benchmarks 25 per cent staff overheads in the budget.

Sanwo-Olu said the proposed budget would help the State achieve a sustainable social investment and scale up private sector-led economic growth through investment in infrastructure and security. He said it would also improve civic engagement in governance and foster partnership with the Federal Government and the civil society.

Explaining why his administration will be earmarking huge funds to the environment and public infrastructure, the Governor disclosed that Lagos had been facing combined threats from population explosion and climate change.

He said: “Lagos faces an existential threat, arising from the interplay of demographic and climate change. Lagos will continue to be a magnet for multitudes within and outside Nigeria, in search of jobs and economic prosperity. These levels of migration put phenomenal strain on the physical and fiscal resources of the state.

“In response to the perennial challenges of flooding in the metropolis, we have to triple the capital budget provision to tackle this observed problems from N3 billion in 2019 to N9 billion in 2020. We are embarking on massive desilting of major drain systems across the State next year.”

Meanwhile, the governor plans to spend N48 billion on education and technology. This represents 60 per cent rise in capital allocation to the Ministry of Education. On healthcare, the State plans to spend N33 billion on healthcare programmes, which include proposed revamping and re-equipping over 350 Primary Health Centres.

Sanwo-Olu described the proposed budget as “unique”, noting that its details reflected the wishes of residents, following series of consultations and feedback from stakeholders across senatorial districts.

The Governor assured residents of transparency and accountability in the implementation of the budget, pointing out that there would be strict performance mechanism to drive compliance and measure the progress of the budget at the execution stage.

He said: “The 2020 Budget will be supported by a Performance Management System that will ensure that, by December 2020, we shall achieve an optimal budget implementation when compared with previous years. This is in line with our commitment to transparency and accountability in the management of public finances.

“We have provided N11.8 billion as counterpart funds in preparation for various social impact schemes. In addition, we have made provisions for N7.1 billion this year, to provide for industrial hubs, parks, graduate internship programs and virtual markets for artisans. This is in support for Micro, Small and Medium Enterprises (MSMEs) which are the engines for both economic and employment growth.”

Reviewing the performance of 2019 Appropriation Bill, which he signed into law in June shortly after he assumed office, Sanwo-Olu said his Government embarked on strict implementation of the budget and achieved 69 per cent efficiency at the end of September. 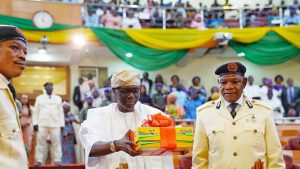 He added that the loan will also enable his administration to start the desilting of drain systems, provision of security and emergency hardware, light rail infrastructure, and construction of a General Hospital in Ojo, which is to be fitted with a Spinal and Neurology Unit.

Sanwo-Olu reiterated that his administration’s development agenda, known as Project T.H.E.M.E.S, was designed to address major challenges facing the State and create a city that would work for the citizens. He said his administration was ready to transform Lagos by rethinking projects that will improve the wellbeing of the residents.

He said the Governor’s activities since his assumption of office had re-assured Lagosians about Sanwo-Olu’s zeal to fix problems he inherited from the last administration.

“Mr. Governor, your actions so far have shown the zeal, desire and passion in you to get things done, to fix what has been left undone and to move the state forward. Hence, we believe that the content of the budget will serve this purpose in making life worthy of living for our people in Lagos”, the governor said.

Obasa promised the Assembly would ensure speedy passage of the budget and make it a “New Year” gift for people.

The Assembly chamber was filled to capacity, as a large crowd of Lagos residents, comprising leaders and members of the ruling All Progressives Congress (APC), State Executive Council members, traditional rulers, workers, traders, artisans, students and stakeholders in the private sector, witnessed the budget presentation.