A 42-year-old man identified as Ayuba John have been arrested by Nigeria Security and Civil Defence Corps (NSCDC) officials after his failed attempt to sell his three-year-old son. 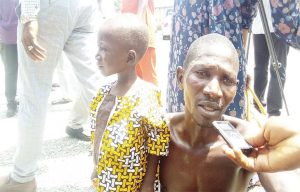 It was gathered that Ayuba, who is from Obi Local Government area of Nasararwa state was arrested when he showed up to collect the negotiated sum of N5million.

Mohammed Mahmoud-Fari, State Commandant of the NSCDC told newsmen that the man was arrested on Tuesday following a sting operation by the officers of the command, NAN reports.

According to Mahmoud-Fari, the man, who hailed from Obi Local Government Area had concluded plans to sell his son for N5 million.

He said: “Our undercover officers got wind of his plan and opened negotiation with the suspect who offered to sell the son for N5million.

“He opted to collect the money in cash and it was in the process that we arrested him in Lafia. I was moved to tears when I learnt that a biological father took his son to the market to sell him at the sum of N5million. When he was asked why he want to sell his son, he said he wants to argument his financial status.

“We also learnt that this is not his first child to be sold out. He sold his daughter earlier on to somebody in Owerri, and he is selling them out for rituals,” Fari said.

The NSCDC boss said an investigation revealed that the man has five wives and 23 children, out of which he had already sold a daughter.

Married to four wives with 23 children, Ayuba blamed the economic hardship in the country for his action.

0 0 0 0
Previous : Man Kills Brother For Having Affair With Wife
Next : Fidelity Bank Restates Commitment To Expansion Of Customers’ Businesses