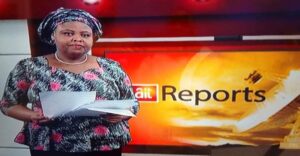 According to reports, the broadcaster died on Sunday after undergoing surgery.

A source disclosed that family relatives unveiled the news to management and staff of the station on Monday.

Udom was said to have successfully undergone the surgery, but later gave up the ghost due to complications.

She was best known for anchoring the AIT Lagos News at 6:30 PM, and also headed the Entertainment Reportorial Desk.