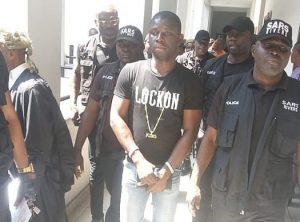 West, who had confessed to killing seven women in different hotels was brought into the court premises in Port Harcourt around 10.28 am by heavily armed personnel of the Federal Special Anti-Robbery Squad.

The charges against the suspect were not read to him because no lawyer was representing him in court.