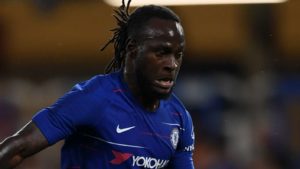 Chelsea have announced that former Nigeria International, Victor Moses has joined Fenerbahce on an 18-month loan deal until the end of the 2019-20 season.

The Blues had hoped to offload the ex Super Eagles player on a permanent deal during the January transfer window after he fell down the pecking order at Stamford Bridge.

The 28-year-old is understood to have turned down the chance to move to the Chinese Super League, but Chelsea eventually buckled and afforded him the chance of a temporary move.

Moses, whose current deal with Chelsea runs until 2021, was a key part of ex-Blues boss Antonio Conte’s 3-4-3 system, but has found opportunities limited since Maurizio Sarri’s arrival.

With Sarri having a preference for 4-3-3, Moses has appeared only five times since the Italian took over at Stamford Bridge, deployed as a wide forward rather than at wing-back.

A move to Turkey, however, gives the former Wigan Athletic man a chance to revive his career overseas.

Fenerbahce are slumped in 15th place in the Turkish Super Lig, struggling badly for form having won only three league matches this term, and will hope Moses’ arrival injects fresh impetus into the side.

Just two points off the bottom of the table, the Istanbul giants are in serious danger of relegation.

Moses is just one of a number of players the Blues are seeking to move on in the winter window, with Cesc Fabregas having already made a move to struggling Ligue 1 side Monaco.

0 0 0 0
Previous : Just In: Buhari Suspends Onnoghen, Swears In Mohammed As Acting CJN
Next : Facebook To Integrate Whatsapp, Instagram And Messenger