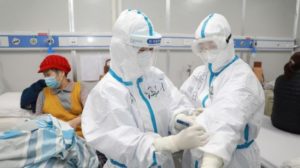 Following the confirmation of the index case of coronavirus disease in Lagos state, the federal government on Monday disclosed that no new cas of the malignant disease has been recorded in the country as at the 1st of March, 2020.

Out of about 14 tests that were carried out, only one patient – the Italian citizen who works as a consultant in Nigeria, from Milan, Italy, tested positive to the disease.

In a press briefing Monday morning in Abuja, the Minister of Health, Dr. Osagie Ehanire, said that the number of identified contacts of the index case in Lagos and Ogun states are 19 and 39 respectively. This makes a total of 58 people who have had contact with the index case that have been placed under supervised self-isolation.

According to him, “Currently, the contacts of the index case are identified as 19 contacts in Lagos and 39 contacts in Ogun state. We are in touch with these contacts who are under supervised self-isolation and the states have provided them with temperature monitoring tools. Both Ogun and Lagos states have activated their EOCs also.

“As at the 1st of March, there is no new confirmed case in Nigeria. About 14 tests have been done, and except that one patient, no other person has been diagnosed.

“There were 156 passengers on the manifest of the flight that brought the index case. Port health services and NCDC have been supporting both Lagos and Ogun state governments to carry out contact tracing and other response activities.

“We have also deployed rapid response teams from the NCDC who are working closely with all the states. It is important that all Nigerians focus on the facts not fear and not to generate panic”.

Concerning the suspected cases in Plateau state, Ehanire said, “Plateau state government reported four suspected cases among Chinese nationals on the 29th of February, 2020. None of these cases have any symptoms; they have all been tested at the Nigeria Centre for Disease Control (NCDC) reference laboratory and they are all negative for coronavirus infection.

“The state has placed them under supervised self-isolation for 14 days. We continue to monitor the global situation with cases spreading quickly in countries as they are doing now.

“There are only three countries affected in Africa: Egypt, Algeria and Nigeria.”